God Carries Out His Mission in and Through Global Migration

A recent article by a Latin American theologian I admire very much, Samuel Escobar, describes how global migration is surely a factor in how God is carrying out his mission in the contemporary world.  "Mission Fields on the Move" demonstrates that the extension of God's kingdom has always been carried out in a context where people have been on the move, whether it be due to economic realities or outright persecution.  In the Hebrew Scriptures God makes extensive provision for the alien and stranger.  For example, Deuteronomy 10:18-19 God's love for the alien is spelled out, and he commands the Israelites to love the aliens, for they, too, were aliens in Egypt. 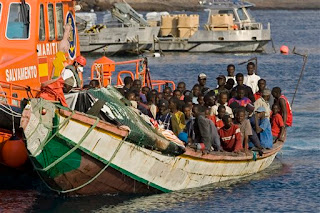 Recent rhetoric that borders on xenophobia is not at all what the Lord God has in mind for his people.  Escobar makes three significant points in his article, after outlining how migration played an important part in the expansion of the gospel during the time of the early church.  First, he calls for Christian compassion and sensitivity.  Second, he recommends that churches should take a prophetic stance against the injustices and abuse that migrants often suffer.  Thirdly, he suggests that the church can see the global migrant movements today as opportunities for outreach.

Whatever the state may feel compelled to institute in the interests of its own self-preservation, we are called to love even our enemies.  If Lutheran pastors ministered to Nazi prisoners of war in concentration camps in North Dakota during WWII, it seems the church today can find it within itself to care for those who, for whatever reason, find themselves among us at this time in history.  Who can know how God can use us in such circumstances.

NOTE: Here is a statement from the president of the Lutheran Church--Missouri Synod and the Executive Director of LCMS World Relief and Human Car on the issue of ministry to the aliens in our midst.
Posted by Asturiano at 6:00 PM