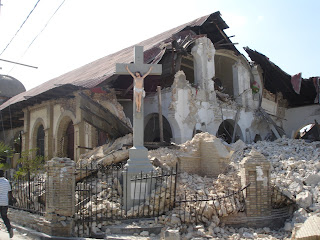 This will be the last update for now on our trip to Haiti. Unfortunately I was not able to get to a computer since my last update up until now. I am in Miami on my way back to Fort Wayne.

In Port-au-Prince on Saturday we stopped at the church where Pastor Thomas Bernard is pastor. His building held up very well, although one long, high wall that runs along the playground area had fallen down into the play yard. You can see us standing above the playground on a balcony of the church talking about it. Pastor Bernard repeated many times how every member of his family, including himself, escaped being injured or killed only by seconds. His wife had just walked out the door of an office that was totally destroyed. He recounted similar stories for his children and himself. The same was true of the fallen wall at the schoolyard. It would have surely crushed many children had it happened when school was in session.

I asked Pastor Bernard how people in Haiti interpret the earthquake and how he ministers to them. I was able to video his response with my little camera. You can see it here on YouTube. There are many people who believe this happened because Haiti is a country where Voodoo is practiced. Of course, Jesus responded pointedly to those kinds of self-righteous attitudes (Luke 13:1-5).

We made arrangements to travel back to the boarder of the Dominican Republic with two Nissan Patrols and a truck. Missionary Ted Krey and his teammates were able to purchase about a ton of food, and the hospital in Jimani on the Dominican side of the boarder brought a carload of medical supplies. Upon arrival to the Haitian side of the boarder the convoy from the Dominican Republic crossed over to the Haitian side and we transferred the goods to the trucks that Haitians would use to transport the supplies back to Port-au-Prince and also Jacmel.

After the materials were transferred, we said our goodbyes to the Haitian pastors and members who traveled with us and crossed back into the Dominican Republic. You can see some pictures of our visit to Haiti at http://picasaweb.google.com/lcmsworldmission.

It was after dark by the time we got on the road in the Dominican Republic, but we had about a seven-hour drive ahead of us. We needed to travel back to Santo Domingo, and then up to Santiago, where the LCMS Mission Team is located. The difference between Haiti and the Dominican Republic is dramatic in terms of the material progress of the nation. The roads were all very good; there were full-service gas stations with restrooms, snack shops, soda machines, etc. Around 2:00 a.m. we finally arrived at the hotel in Santiago, but it was hard to get to sleep. It was at least 3:30 a.m. by the time I was able to fall asleep.

On Sunday we had time to rest until 6:00 p.m. when we proceeded to the mission office for a worship service for the assessment team, the LCMS Missionaries, and several Dominican staff people who had also been in Jimani to assist at the hospital there. Rev. Matt Harrison preached a sermon of comfort and encouragement to us based on Mark 15. Later that evening, Rev. Ed and Cherie Auger arrived from the Cayman Islands where Ed serves as a missionary. They are long-time friends of ours and have years of experience in Latin America. They will stay in the Dominican Republic to lend assistance, at least for the time being. Surely they will add a great deal of knowledge and experience to the ongoing efforts to provide relief to Haiti.

Monday morning the entire assessment team met at the mission office with the LCMS Missionaries and Dominican staff to debrief on our impressions and the recommendations that we would make for those who have now to lead the relief efforts. There are immediate needs of food, water, medical supplies and temporary shelter (tents). The LCMS Mission Team is going to continue to provide these kinds of supplies to the Haitian Boarder to transfer to the Haitian Pastors. LCMS World Relief and Human Care is sending medical teams, beginning this Saturday. The first team will fly into Santiago, and then go by chartered flight to Jacmel. Additional teams will be going in the future. Another serious need is for spiritual consolation and encouragement. This is very important. We often think that if we can get food and water in, we have provided for their basic needs. But the emotional and spiritual needs is very great, not only for the hurting people in general, but for the Haitian pastors and leaders who are under the burden of having to minister under intensive stress and pressure.

The disaster in Haiti continues to unfold, and it will be with us for a long time. At least a year, and probably more like 3-5 years, as there is so much rebuilding that is needed. Pastor Kessa even believes that Port-au-Prince should be relocated to a new location where it can be rebuilt properly. It is hard to say how something like that would be implemented or who would lead such an effort. Right now I’m not sure who is in charge of Haiti. The U.S. military is there, the U.N. people are driving around in their Land Rovers, there are many relief agencies working there, but I don’t know who is actually coordinating efforts. The president of the country has been quite silent.

I thank LCMS World Relief and Human Care for asking me to make this visit with them, and President Wenthe and Dr. Rast for giving me permission to be away from my duties at the seminary for a week to do so.

To conclude, I want to say a word of deep appreciation to our LCMS missionaries in the Dominican Republic, the Dominican staff there of very capable and committed people, to the LCMS medical team that was working in Jimani, and especially to the Haitian Lutheran pastors who are working so hard and with such dedication to provide both spiritual and material aid to the people of Haiti.


(Note: Besides the photos that I have already pointed you to, I hope to post more of my own as soon as possible).


p.s. On Monday afternoon Missionary Danelle Putnam took those of us who wanted to go to a government home for severely handicapped children where Danelle and some of the members of the Lutheran church in Santiago are working. We were asked to spend time with the children, even just talking to them and caressing them, as many of them were lying in their beds, unable to move or communicate. We spent a couple of hours there just talking to the children, playing with those who were able, and visiting and encouraging the staff of the home. One child, who looked to be bed ridden, was just lying in his bed staring off into space. As Rev. Harrison went to his bedside and started talking to him, the child just sat up, grabbed him around the neck, and climbed up into his arms. I also spoke to a woman who was there to visit her son. Her son is severely mentally handicapped and is the size of a three year old, but his mother said he was 18 years old. The staff says that she comes every day to visit her son, but in the case of most of the children, nobody knows who their family is.

Again, the work of our LCMS Missionaries and the local Lutheran Christians there is impressive.
Posted by Asturiano at 5:20 PM