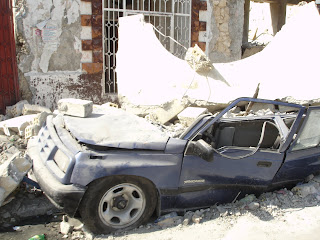 Much has happened since I was last able to make a report, but I will try to briefly summarize the past two days.

On Saturday we arose early in Jacmel to make the long journey back to Port-au-Prince and then up to the Jimani in the Dominican Republic. As we passed through Jacmel we saw again the great destruction apparent everywhere. Virtually everyone is afraid to spend the night in their homes and so tent cities are set up everywhere. As we were getting organized at Pastor Kessa's home for the return two U.S. Air force C130s flew directly overhead to land at the small Jacmel airport. I could see the JATO (jet assisted take off) bottles attached to the bottom of the wings, as the airport is rather small for such a large aircraft. They would be used for takeoff after the supplies were unloaded.

There was another aftershock Friday evening, which was not felt to strongly in Jacmel, but during the trip back to Port-au-Prince the additional damage to the mountain road we would need to take was clearly evident. In fact, the road was very close now to being impassable due to landslides and other places where the road was sliding away, down the mountainside. Again, passing through the town of Leogane the damage was extensive. On the outskirts of town we saw a huge U.S. Navy helicopter that had landed on an open field. Marines had secured the area and another large group was unloading the supplies. Everything was being done in an orderly manner so that all the people waiting in the parameter would get their share.

Port-au-Prince is still in disarray, but, at the same time, there are street vendors everywhere, and many people who seemed to be going about their business. Yet, still, in 3-4 piles of rubble we saw people gathered around digging with their bare hands thinking that there might be someone alive underneath. We drove through many areas of Port-au-Prince and for the first time we saw a large digger, operated by a man who appeared to be American, scooping up rubble and loading it into dump trucks. That is the only piece of heavy equipment we saw being employed during the entire day. The U.S. Marines seemed still to be active patrolling the city in their Hummers. Many U.N. Nissan Patrols and Toyota Land Cruisers were driving around, usually with one person behind the wheel in his/her air-conditioned chamber, but not carrying any supplies or additional people that I could see. There were places where we could smell the smell of dead bodies, but there was no way to get to many of the places it was coming from without heavy equipment.

I have to cut is short now because my time of the computer her is running out. I have some pictures that eventually I should be able to share once I get back to the U.S. There is still much to say about our return to the border with the DR. The courage of the Haitian Lutheran pastors is incredible, and the work of our LCMS and Brazilian missionaries is absolutely outstanding. We can be proud of the way they are responding. Today the assessment team is going to meet with the Mission Team here and discuss next steps for immediate action. Please keep this meeting in your prayers. There are many issues that need to be addressed.